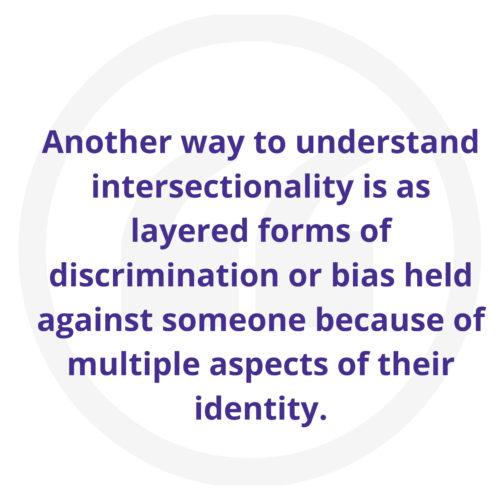 Although Kimberlé Crenshaw coined the term “intersectionality” over three decades ago, the concept feels relatively new for many of us.[1] Intersectionality is the cumulative way in which the effect of multiple forms of discrimination combine, overlap, or intersect, especially in the experiences of marginalized individuals or groups. Another way to understand intersectionality is as layered forms of discrimination or bias held against someone because of multiple aspects of their identity. For example, discrimination shows up differently for Black women in society, because of the combination of their race and gender, than it does for Black men and White women. This is true of other intersectional identities as well.

Workplace investigators are trained to categorize and simplify complex issues for our clients, so we may find ourselves focusing on classic and singular forms of discrimination, such as racism and ageism.  However, we can learn to watch for specific indications of intersectionality, and then consider the nuances this brings to a complaint.  One such indication is when a complainant says they are being mistreated because they represent a subset within a particular marginalized group. For example, a complainant might make comments like “I’m being treated this way because I’m a gay man of color;” “because I’m a low-income student with a disability;” “because I’m a Muslim woman;” or “because I’m a Chinese immigrant.”

Employers and educational institutions might misread an intersectional complaint by focusing on only one of the identities the complainant mentions. For instance, a Black woman’s complaint might be seen as raising concerns only about racism, or a Latina’s complaint may be seen as a complaint solely about gender discrimination.  In both of these examples, the complainants are naming two parts of their identity – gender and race/ethnicity – as the reason they feel targeted. Regardless of how a complaint is described at intake, an investigator should pay attention to how the complainant frames the issues underlying their alleged mistreatment and stay open to the possibility that multiple factors or biases might be at play.

We also should consider subcategories and intersectional identities within a marginalized group. Just as a person can discriminate against another member of their own social or marginalized group, so can a complainant and respondent have in common one aspect of their identity. For example, just because the complainant and respondent are both gay men does not mean that a White gay man is not discriminating against a Hispanic gay man due to racial bias.

Comparator evidence needs to be used more cautiously during an investigation involving intersectional discrimination. For example, comparator evidence showing that a respondent treats other Black employees well might not be enough to unsubstantiate a Black female employee’s discrimination complaint if the other Black employees with whom the respondent has positive relationships are all Black men. Likewise, if the respondent is known to treat the women in his office well, it might be premature to conclude that this Black female employee’s complaint lacks merit if the other women in the office are all White and Asian American women, and the complainant is the only Black woman. Appropriate comparator evidence in this instance will examine how the respondent specifically interacts with other Black women.

The “sex-plus” doctrine demonstrates how the Supreme Court has approached comparator evidence when discrimination was aimed at a subsection of a group. In Phillips v. Martin Marrietta Corp., the Supreme Court held that sex discrimination had occurred even though the employer did not discriminate against hiring women overall, because the company had avoided hiring women with young children while still hiring men with young children. The employer’s statistics showing that women were being hired more than men failed as a defense because the Court was specifically examining discrimination towards a subset of women, women with young children, rather than women overall.  Essentially, comparator evidence that is not specific enough might be insufficient data on which to base a finding.

Sometimes specific comparator evidence is not available because workplaces are not always reflective of the diversity in society at large. Absent such evidence, the investigator must rely on other types of evidence, such as witness accounts, credibility, and stereotyping, derogatory language, or a pattern of behavior by the respondent suggesting bias against a particular subset – in the case above, Black women. The investigator’s own cultural competency comes into play when determining whether the respondent treated this complainant unfairly specifically because she is a Black woman. 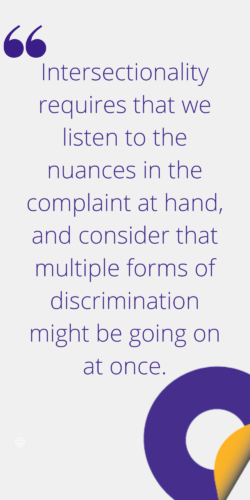 Intersectionality requires that we listen to the nuances in the complaint at hand, and consider that multiple forms of discrimination might be going on at once. These layered issues might also require employers and schools to be flexible in how they process intersectional complaints, as we have seen some confusion and delay in cases when institutions are not sure who or which one of their investigative offices should handle such complaints. For example, when a Filipina professor files a grievance against a White dean at a university, should the university’s Title IX or EEO office investigate it? This could be a responsibility shared between the two offices, or the college could launch two separate investigations into the same complaint, which could be costly and also could prolong the conflict. Either way, institutions and investigators should recognize when intersecting forms of discrimination are present in a complaint and have flexible plans and systems in place to address them.

As we conduct investigations, particularly in this moment of heightened social tensions, remaining mindful of intersectionality will help us better understand and support the unique experiences of individuals who sit at the cross-section of multiple forms of discrimination within our society.